Kids and Piercings – Is It Worth the Trouble?

Once upon a time, I was a wild, free spirit. I danced on tables, went to bed at 3 in the morning, and then woke back up at 7, just barely functional, to start the day all over again. When I think of how much I spent on my tattoos in those days, versus how much could be in my savings account, I get a little dizzy. Without kids, all I had to worry about was my job, and keeping a roof over mine and my husband’s heads.

After you have kids, it’s not that you can’t still do these things, but that you’d just rather not even bother most of the time. Going out clubbing? How about I sleep instead, thanks. Tattoos have come to a grinding halt since having our son – the expense is more than we can justify when there are birthday party deposits and urgent care center bills piling up – the ink waits.

Piercings present a quick and affordable alternative body modification though that could still be an option for us, except for a couple of golden rules that stand in the way:

If you have it, your toddler will try to take it.

If it hurts, your toddler will touch it.

So it begs the question, can you have fresh piercings around tiny humans with an inkling for mischief and a desire for destruction? The answer is iffy.

Piercings can’t be tugged on during the healing process, but they also need air circulation to properly and effectively heal, so stuffing them under a bandage is generally not a good idea.

Here are my two cents: I know that my toddler, while adorable and full of wonder and love, is not one to listen to reason when it comes to things he wants to touch. If it’s shiny and he wants it, there is very little stopping him. If I was really, super consistent, and incredibly careful, then maybe I could get him to understand that touching piercings hurts Mommy, and that it’s a no-no – maybe. 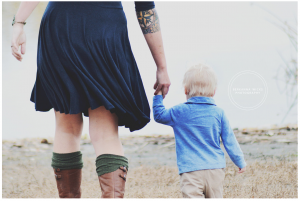 My little sweetie and I – I love piercings and body art, but I love him more. Compromises, baby.

The thing is, it really just depends on the age of your kids. My son is 22 months, and right around that age where he’s just starting to follow directions, but still relishes being a wild and crazy, uncultured little creature. Often times if my husband has his shirt off and our son sees his nipple ring, he’ll get a mischevious little grin on his face as he sneakily goes to touch it, at which point my husband has a tiny moment of panic and puts his shirt back on.

If your kids are under three, I’m going to say that getting fresh piercings is probably not a good idea. And that makes me sad, but it’s just my honest, right-here-in-the-trenches-with-you, opinion. Kids in that age range are just starting to learn how to follow directions, and if they’re under one year old, you generally just can’t have the expectation that they’re going to fully understand what you’re saying, and why they can’t do something.

As they wrestle and play, even older kids could prove to make healing your piercings a challenge, as they bump into you and flail their arms, so make sure if you do get a new piercing, that it isn’t something that just suddenly happens overnight. Sit them down and explain to them what happened, and that mommy or daddy’s body hurt there and needs to heal. Tell them how you love them and care for them, and that you need them to care for you, and be extra gentle with this tender space on your body.

Children seem to learn best by what they see, so if you show them tenderness and care for their own pains and sensitivities, they’re more likely to be emphatic and conscientious with you. Let them get a good look at your new piercing, and explain to them in detail exactly what happened, and why it hurts. Much of what we say to kids is laden with information that we take for granted, so it’s important to really spell it out for them from start to finish.

As far as healed piercings go – should they stay or should they go? Again, it’s a toss-up with age. If your kids are old enough to understand that this is your body (at least three years old), and they have to ask your permission to touch it and be extra careful around pierced areas, then I feel like it shouldn’t be a problem to keep your piercings in. However, with younger children, you’re going to have to accept that they won’t understand why they can’t touch something like that for a while, and the primary responsibility of keeping your piercings safe will fall to you.

In my opinion, if you have a piercing that normally stays under clothing, like nipples, navel, etc., then I feel like that shouldn’t be a problem. However, if you have something like your lip or septum, or dermals in your chest, then it’s much more likely your child is going to grab or bump into them at some point, and it’s not worth it to keep them in.

Back in those wild and free days of mine, I had my septum pierced and big, beautiful stretched ears. I’ve since let my ears shrink down to 2’s, and taken my septum ring out. My plugs aren’t too much of a problem with my toddler, though every once in a while he’ll make a game of trying to pop my husband’s plugs out of his ears, or snatching my dangle earrings. However, the septum ring I knew couldn’t stick around. 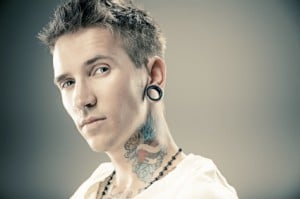 Steer clear of tunnels if you have younger kids – plugs are a safer bet.

If you have plus, you can still keep them in, but I wouldn’t size up for a while. Stick with plugs over tunnels, save the dangles for date night., and generally make sure your ears look as uninteresting as possible to your little one.

One day when our family is older, I may come back to it and get my septum re-done, but for now, we’ve accepted one concrete truth of being parents – your body is your children’s playground. It’s where they grow, snuggle at night, play in the day, and until they’re a little older and more independent, you can’t expect anything less from them.

I’m curious to hear from other parents in our audience though – do any of you have piercings and young kids? What was that like during the initial healing process? Were you able to keep facial piercings in? Let us know in the comments!

How to Get the Piercing Jewelry You Want This Holiday Season: A Shopping Guide for Giftees

Are Piercings Unprofessional? On Facial Piercings in the Workplace

Next post Pour Some Venom on Me: The Venom Piercing

Pour Some Venom on Me: The Venom Piercing