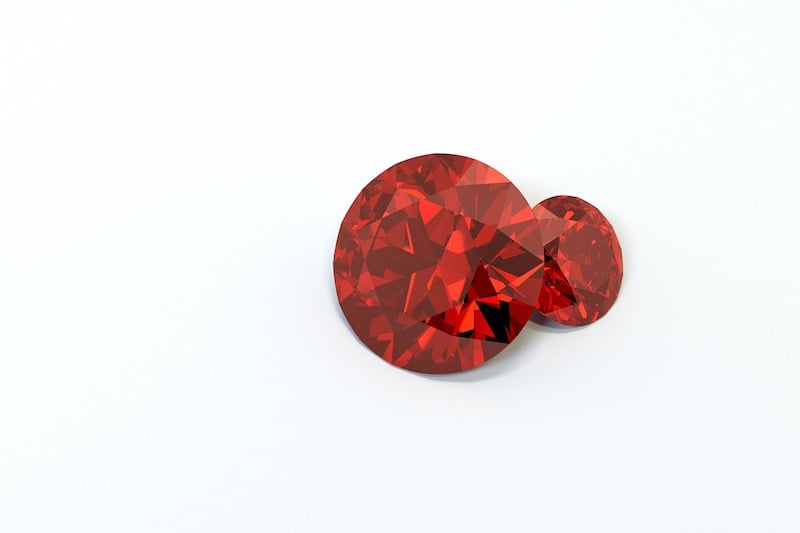 The gemstones of love and friendship, garnets have graced royals and characters of legend for many millennia. Usually characterized by their deep red tone, these gemstones actually boast a variety of colors and compositions depending on the minerals that make them.

When used in jewelry, the garnet is known as January’s birthstone and the second anniversary stone. But, what exactly are garnets and how do you know what to look for when shopping for garnet body jewelry?

Garnets are created when different, but closely related, minerals come together. Depending on the minerals that make up the garnet, these stones can manifest a range of colors, hardnesses, and opacities.

A garnet is a gemstone made from a variety of closely related minerals. Known for its red tone, it can come in many different colors.

Garnets can be used in jewelry, for industrial purposes, and other uses. Their varying chemical compositions make them one of the more versatile gemstones around.

Typically, Almandine garnets are the specific type of garnet used in jewelry. These stones are usually deep red, brownish red, black, or purple, and they can be opaque or translucent. They’re the most common garnet, making them an inexpensive gemstone. They’re also known for their durability, so they’re a great option for those who are looking for a gorgeous piece of body jewelry that won’t easily scratch.

A history of garnets

The use of the garnet dates as far back as 3100 BC. Archaeologists have found garnets all over the world set into jewelry and polished into beads.

Although garnets were quite popular among the Egyptians, Romans, and Greeks, their greatest source comes from modern-day Czech Republic, and garnets in Bohemia became a rich industry. Even today, Bohemia garnet jewelry is still coveted.

Garnets have found their way across mythologies and legends. Believed to cure depression and bring people home, the symbolism of the garnet can be found in the legends of Christians, Greeks, Romans, Chinese, and many more.

What do garnets symbolize?

While every culture puts its own symbol with the garnet, a prevailing theme is love and friendship. Specifically, when a garnet is given to a loved one, it ensures that they will return to you one day.

Garnets are widely associated with love and friendship.

The garnet is also associated with passion. Attached to the heart, this gemstone was widely believed to cure heartache, depression, and other emotional maladies. Those who believe in the spirituality of gemstones will turn to the garnet when they need mending of the heart.

Although garnets come in all sorts of colors, when one refers to a garnet gemstone in terms of jewelry, they’re typically referring to a red garnet.

Like other gemstones, garnets can be cut into a number of different shapes which will ensure varying levels of sparkle and color. Most garnet jewelry should be semi-translucent and have good clarity.

Because the garnet is so common, it’s usually one of the least expensive gemstones. This means that you can likely find a larger garnet gemstone for a price that will fit your budget. If you love big, bold jewelry options, then consider shopping for a garnet.

They’re also known for their durability. If you’re an active person, but you still enjoy sporting some bling, then a garnet might be ideal for you.

Looking for some gorgeous garnet body jewelry? Check out some of our favorites.