We’ve been talking a lot about daith piercings lately – they’re all over social media, getting attention not only as a unique bit of cartilage in your ear to adorn, but even a possible cure for migraine sufferers.

There’s a lot of anecdotal evidence and some hit and miss science to suggest that it might actually work, but what better way to really know than actually asking somebody who has done it?

I’ve personally suffered from migraines with neurological symptoms, and I can tell you, it’s no picnic. However, I was lucky enough to discover that regular magnesium supplements were an effective fix for me, and (knock on wood), I only get them once or twice a year now. 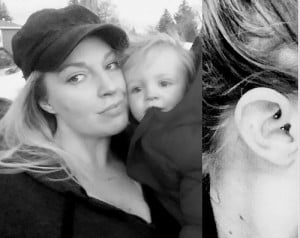 My friend Brenna hasn’t been so lucky – this girl has a crazy amount of migraines, and the kind that completely debilitate and disable a person for a solid 24 hours. It’s an impossible kind of pain that makes you a shell of the person you normally are, and for most people, there is no relief – there is no magic drug.

In search of something, anything that would ease her pain, Brenna just recently had her daith pierced, the small inner bit of cartilage closest to the opening of the ear canal. I interviewed her to see the difference if made on her migraines, and if the hype surrounding this new piercing really lives up to reality.

Can you tell us a bit about your migraines? How often were you getting them before your piercing?

I’m not sure exactly when they began for me. They’ve just always been a part of my life. My mom would say that I would just scream sometimes when I was little for no apparent reason. She’d try everything, to no avail. And finally, one day when I was 3 years old she lost her temper and yelled at me, “What’s wrong with you?!” That must have been the push my little brain needed because I was finally able to form the words, “My head hurts!”, which made sense to her because migraines run in our family – all of the women have struggled with them.

From then on it was doctor after doctor,  medication after medication – biofeedback, acupuncture, massage therapy, physical therapy, marijuana, etc, etc, etc – all with little to no effect. I was getting little migraines 3-4 times a week, and one BIG can’t-move-can’t-stop-puking, can’t see, ER-visit-migraine with my period every month….from the time I was 11 – roughly, 204 hospital visits in the last 17 years! I’ve been desperate for relief!

Did you have to take medications for them?

Oh God, in the last 25 years I have seen multiple neurologists & pain specialists, all who had different pharmaceutical approaches. I have tried every drug on the market at one point or another. Many were  prophylactic in nature, such as antidepressants and anti-seizure medications – both of which are believed to be connected to migraines. Others were migraine-specific like triptans, which were introduced in the 90s in an attempt to abort migraine attacks once they have already started…those didn’t work for me at all. Corticosteroids such as Decadron work extremely well! However,  due to the long-term side effects, they cannot be taken long term. Sooooo… it’s been a struggle

On a scale of 1 to 10, before your piercing, what was the pain level typically like for your migraines?

The smaller, more frequent migraines were/are usually about a 5 or 6 for me. But the BIG, paralyzing migraines are absolutely a 10. When those hit, everything is too bright, too loud, smells are too strong. I shake and cry and can’t move. I have spots in my vision and get very dizzy. The nausea gets so bad that once I begin throwing up, I can’t stop until I get shots of Reglan…and by then I’m usually so dehydrated that I need fluids too. I end up completely helpless. It’s humiliating.

What was it like getting your daith pierced? Did it hurt?

Overall, it was a great experience! I vetted several shops and asked a lot of people before choosing the piercer. So when I went in I was really confident in my choice! As far as pain, I have a really high tolerance, so for me, it was uncomfortable.  It DEFINITELY didn’t feel good! But it wasn’t awful. I was holding my son who was asleep drinking from his bottle and he didn’t wake up, haha so I guess I didn’t jump at all if that says anything

Was it difficult to find a piercer that could do it?

No. Word of mouth is a very powerful thing! So I had heard of this Piercer before I even considered getting this done. And he absolutely lived up to his reputation!

How long did it take to heal?

Because it is a cartilage piercing, it will take almost a year to fully, completely heal! Crazy, right? But totally worth it!

Did you find that keeping the piercing clean was easy?

The act of cleaning the piercing itself is easy, yes! Getting into the habit of cleaning it multiple times a day is a little tough to get into at first, but you get used to it.

How often are you experiencing migraines now?

I actually had a migraine when I went in to get the piercing. I experienced relief as soon as he stuck the needle through! I didn’t want to get too excited and get my hopes up, so I attributed that to the rush of endorphins. But since getting the piercing, I have only had TWO big migraines, both came with my period each month. One month I didn’t get a migraine at all! And if I get a little migraine,  I can usually stop it with something as small as Aspirin. It’s been completely life altering!

Are you still having neurological symptoms with your migraines now? Has the intensity changed at all?

I do experience light and sound sensitivity when I get a migraine still and as far as I can tell, the intensity of those symptoms hasn’t changed at all.

Would you say for you, that this piercing was effective at migraine prevention, or no?

100% without a doubt, getting my daith pierced has not only been effective, but it has had an incredible impact on my quality of life. It’s been absolutely phenomenal! The frequency of my migraines has gone down dramatically! However, the severity has not changed for me.

When I do get one, it is still just as debilitating as before…Except now, those occurrences are so rare, I actually get to enjoy my days, play with my son, cook dinner for my husband! I’m not completely at the mercy of my head anymore and it’s amazing!  I could not be more grateful and I would not hesitate to recommend trying this!

Conclusion: 100% without a doubt, effective

Brenna is a beautiful girl with a growing little boy to look after, and no time to let migraines slow her down. As a person who knows firsthand how crippling these can be, I can’t even imagine having them as often as she has, but it looks like daith piercings might actually be a legitimate form of relief.

Can You Get Headaches from Piercings?

Piercings for Migraines and Pain Relief: Do They Work?

Can Piercings Help with Pain? A Brief Guide to Piercings and Acupuncture Points

How to Gently Stretch Your Ears