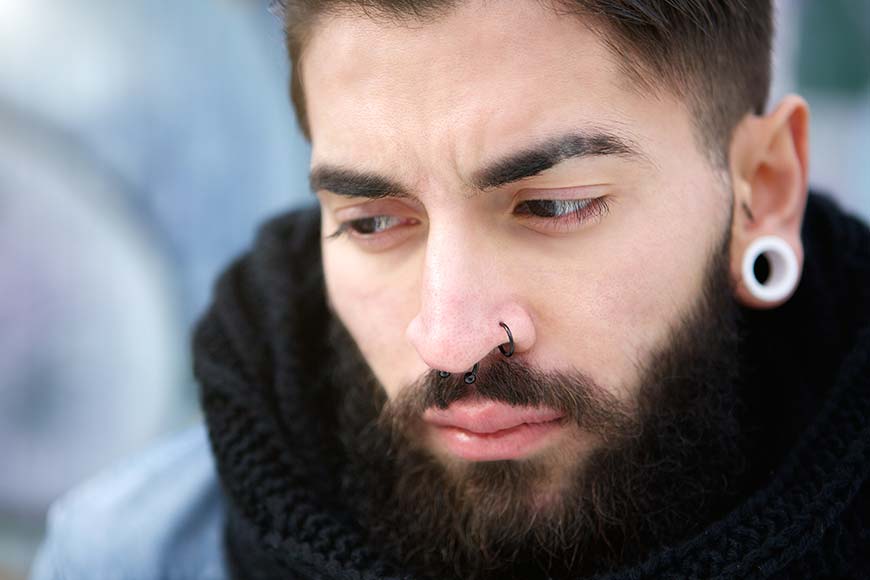 Nose to Nose: The Evolution of Men and Women’s Nose Piercing Trends

There are ridiculous amounts of ‘nose’ idioms circulating upon this sweet planet, all with various reasons, stories, myths, legends, and heresies surrounding their origins.  Having a nose for something; being able to sniff something out; being a brown-noser; don’t cut off your nose to spite your face.  Seriously, I could list these things for hours!!

But why the nose??!!  What is so spectacular about the sniffer on your face; the thing that protrudes from the circular edifice that holds our brains; the thing that is one of the most popular parts on the body that goes under the knife!!!

I’ll tell you – I have a nose for this kind of stuff!!

To tackle this topic, I did what any human in the 21st century would do…I Googled it.  Turns out those two holes that are your olfactory gatekeepers have a greater function than just sniffing out whatever it is in your fridge that smells like a desert dingo died in your meat drawer!

The nose is a part of your body’s defense system – it tells us what we should draw near to, as well as what we should avoid like the plague.  In other words – our noses are like the SWAT Team…they search the hell out of things until they are given the ‘all clear’.  Furthermore, our sweet triangular body part is responsible for breathing.  However, here’s a little something that sounded like fun when I was touring the minxy world of Google:  our noses are, essentially, our body’s version of Barry White.  They rev up our emotional, sensual, sexual, and romantic metaphorical ‘engines’ with even just a whiff of something intoxicatingly alluring.  #TurnTheLightsDown#YourNoseIsAboutToGetRomantic So, it seems absolutely befitting that one of the main defenders of our body; our body’s very own sexual prowess of a sidekick, should be highlighted and adorned with pieces of metal, gold, and precious gemstones to show our love and appreciation for that sweet little sniffer of ours!

Let’s take a stroll down history’s memory lane, and bring our little buddy with us.  Our first magical stop on this mental vacay is India, where the beauty, mystery, and awe of the nose piercing, allegedly, began.  Anyone remember that movie ‘The Sixth Sense’, where that little kid could see dead people.  To this day, anytime I can see my breath, I see dead people is the first quote that unleashes from my mouth. You see, friends, it would seem that our sixth sense (I’m not saying that we all see dead people…just found some cool info on my Googled mecca) is located just above the upper end of our nose, or at least so say old school ancients and new school occultists that are into this kind of stuff.  Thus, piercing this sixth sense sniffing part of the body could increase the innate abilities to utilize whatever it is the sixth sense does…tracking ghosts or what not.

Now, let’s take it back a bit further…like 6,000 years ago.  Something called the Indian Vedic Scripts were found that mentioned noses had something to do with fertility!!  Yup, two holes in the human nose and an ancient civilization found a way for them to get in on the fertility party!  #NotAllHolesAreCreatedEqual

However, these ancient scripts chronicling the beautiful marriage of noses and fertility became a huge focus in Indian culture, as well as Ayurvedic medicine.  Blushing Indian brides donned a beautiful adornment to their nose for their weddings, and during childbearing years, it was fashionably normal to rock a nose piercing.  Based on Ayurvedic medicine, nose piercings allegedly reduced the pain associated with Aunt Flow, and thus helped in the birthing of new humans.  The ancient ‘moms’ knew this phenomenon, so women abundantly showcased nose piercings even back in Biblical times!    #ThanksIndia#NoseRingsAreTheOriginalEpidural

Men and women, based on historically sound information that I found from very reliable sources on the World Wide Web (cue potential eye roll), have an equal take in showcasing anything from subtle, sexy nose studs and small hoops to a full metal jacket of multiple nose adornments.

Although women have the upper hand in the nose piercing category based solely on the fact that this sweet and sultry type of piercing could alleviate the gut-wrenching pain that occurs once’ish per month, men have a pretty awesome reason for rocking some metal in their sixth sense indicating nostrils.

There is an alleged balance between the male nose and their virility (aka their manliness).  In fact, dating back to the good ol’ ancient times, again – it was assumed that a man with a big nose had a big, well… you knows.  Using the practice of nose piercing, men could accentuate their large asset (take that phrase as you will) to showcase how manly he and his buddy were.  Flash forward to today…I’m not sure how lost in translation that original rationale for male nose piercing has become, but I do know that it’s pretty damn sexy for a man to rock a nose piercing, or two (I’m talking to you, Lenny Kravitz…) I don’t know why everything always seems to come back to sex, but regardless – the history of the nose ring has quite a bit to do with everything ranging from tracking ghosts to birthing babies and showcasing your masculinity.  However, who cares about the significance of the piercing…all I know is that it’s hot, it’s sexy, it’s edgy, it’s unique, it’s individual, and it’s FRESH!!

Pierce to your monthly visitor.  Pierce to birth a baby.  Pierce to showcase your manliness.  Pierce to ward off…or chat with ghosts.  Whatever your reason for choosing a nose piercing, do so in knowing that you are joining an elite rank of humans throughout history that chose nose piercings to represent their inner strength, beauty, and sexual prowess!

Wanna really step up the mating game with your nose adornment?  Check out our incredible original KIWI DIAMOND brand of beautiful nose rings, each handmade to perfection and sculpted with impeccable craftsmanship, quality, and design. How to Get the Piercing Jewelry You Want This Holiday Season: A Shopping Guide for Giftees

Gifting Body Jewelry: How to Choose the Perfect Jewelry for Your Loved Ones

Piercing Aftercare: The Ins and Outs of Healing