Mosh – 7 Tips for Surviving the Pit 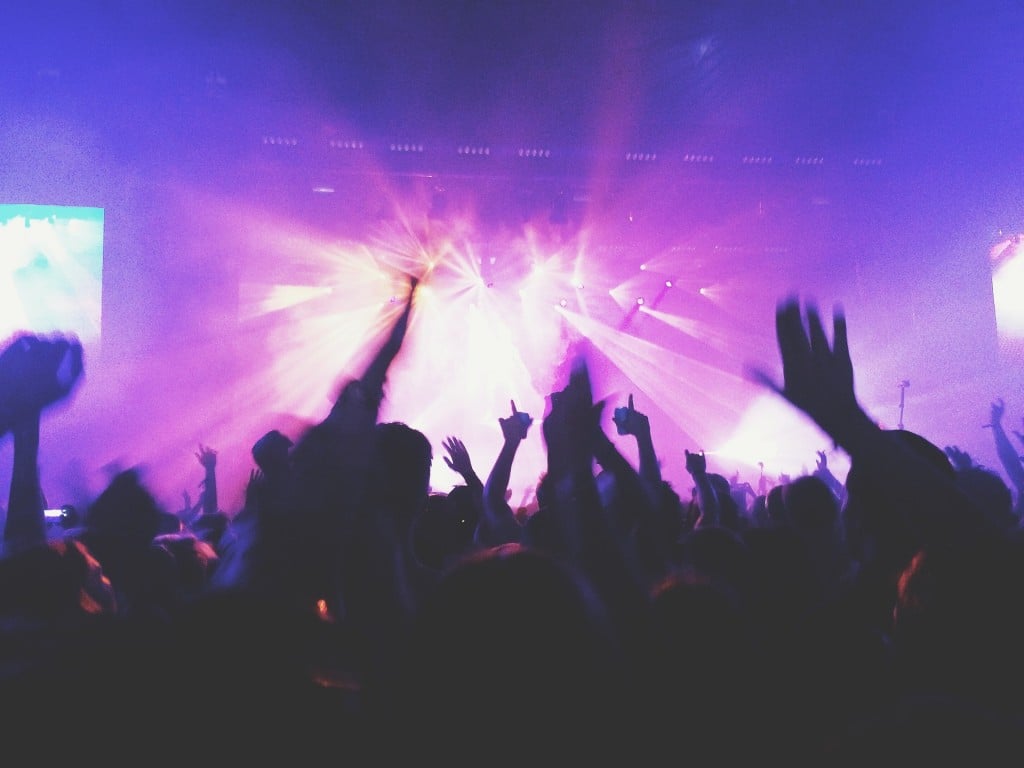 This might surprise you, but once upon a time, I wasn’t a mom, and I did things – badass things. I snowboarded and explored caves, and yep, even moshed at death metal shows.

Most of my moshing days were spent in my teen years, before there was (legal) alcohol use to take the edge off and numb the pain of my most recent injuries. In tiny, crowded, hole-in-the-wall venues, I sweated it out in the mixture of grime and fury that was the mosh pit, running and slamming my body into strangers, and just completely surrendering myself to the intensity of the music.

Moshing is exhilarating – you completely forget that you’re a sane, modern human being, and turn into a complete animal, thrashing and headbanging and shoving, fighting what, you don’t know, but damn does it feel good.

Oh yea, angry teenage Destiny liked to mosh. Ten years ago, I was usually the only chick in the pit, so I got a little laugh out of the looks of apologetic horror on the faces of the men that slammed into me with everything they had, as they realized they had just hit a woman.

Everyone is equal in the pit, and while the objective is definitely not to hurt people or to get hurt, you generally enter at your own risk, because nobody is thinking of your well-being in there.

That being said, over the years there have been some critical lessons I have learned in the pit, and despite it being a madhouse, there are a few underlying rules that, at least the decent human beings try to follow. 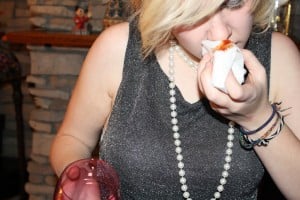 There’s this weird thing that happens in mosh pits from time to time: participants may feel strangely compelled to swing their elbows around horizontally, like a big stupid helicopter, or tuck their knuckles into their collar bone and thrust their elbows up.

I don’t understand it, I don’t know where the hell this idea came from, but let me just make this super f*#$ing clear here: don’t do that.

My first night in a mosh pit was a doozy – I was at a Cannibal Corpse show in a little place in Louisville, moshing away my troubles, and just generally having a killer time. About halfway through the band’s set though, some dumbass caught me under my chin with one of those signature elbow moves, and I bit a chunk out of my lip.

Yea, ow. I was a tiny bit pissed. But you know the worst part of getting injured in the pit? It usually happens so fast, and there’s such a crowd, that you can’t find that asshole to hit them back. Lucky devil he was.

Do everyone a favor, and when you mosh, do it with your body, not the hardest freaking joint in your body – your fellow moshers will appreciate it.

I can’t believe I even have to say this, but history has proven that I do – do not, for any reason, throw kicks in the pit. Just don’t do it. Not only are you likely to seriously injure your own genius self as a wave of bodies gets caught around your lone appendage, but you can seriously hurt someone.

This story from Metal Sucks covered a woman’s horribly injury from taking a kick from a steel-toe boot to her jaw. It was broken in four places, and she suffered bleeding on her brain. Seriously, a steel toe boot to the jaw.

Come on people; use your brains, and avoid injuring someone else’s for that matter. Absolutely no kicking for any reason in the pit. 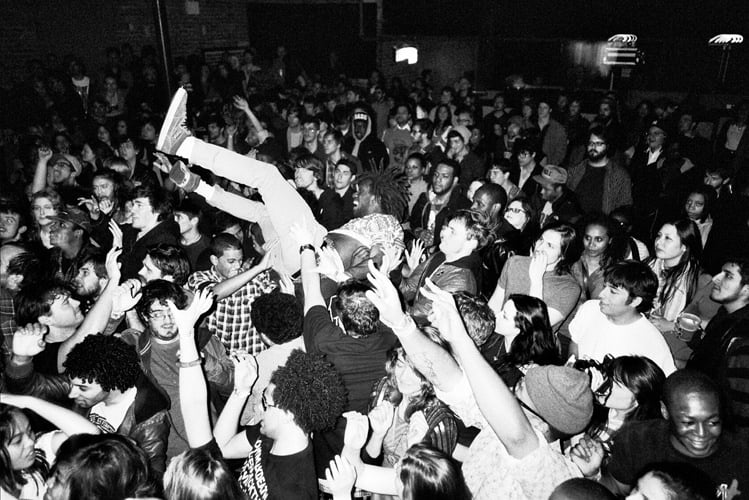 I remember one balls-hot summer at Warped Tour up in Cincinatti, Ohio, I was deep in the pit on the set of Killswitch Engage, and that godly man with the voice that sounds like a chorus of Nordic gods, Howard Jones, bellowed out:

My eyebrows disappeared into my bangs, and I watched in horror as the massive crowd split in half and backed up, preparing for a full frontal assault on the two halves. I had no idea what a Wall of Death was, but based on what I was witnessing, I knew I didn’t want to be a part of it.

I shimmied my way backward into the crowd, away from the edge of the wall, and to the safer perimeters of the crowd, just in time to see the two masses of bodies hurl themselves at each other. It. Was. Brutal.

I know, I’m a total Nance for not taking part, but that was one type of mosh pit I didn’t want much to do within a crowd that size. The moral of the story? Know your pits, and know what you do and do not want to be a part of.

Circle pits can also be particularly dangerous. This is when the crowd runs in a circle, pushing and shoving and thrashing against each other as they go, round and round, until the pit erupts back into chaos again. It’s crazy fun, but if you trip, you could wind up getting trampled (and it is very easy to trip when they are that many bodies flying around).

Have fun, but stay safe, you crazy kids.

It seems every Warped Tour is characteristically hot – crazy humid, sun beating down, and like 90 degrees – every damned year. With the forces of nature conspiring against us, my friends and I resorted to drastic measures that intense day in Ohio at the Warped Tour.

I remember I wore jeans (like an idiot), and found someone with a shaving kit – I cut the jeans off in the bathroom stall with one of his spare razor blades and breathed a sigh of relief that I wouldn’t just have to go pants-less.

Say what you will about the scantily clad girls hanging out at the venues, but that year, I saw the chicks in bikinis draped around the Monster Energy Drink booths, and thought to myself, ‘Damn, they have it totally figured out. No clothes? Why didn’t I think of that?‘.

That being said, in the pit, it’s a whole other story. Your best bet is going to be wearing clothing you can really move in, that’s free from too many straps or loose pieces to get caught up in (sorry, no trip pants allowed). Ladies, keep in mind that your body is going to pretty much be a projectile, so if you can’t touch your toes without showing something you’d rather keep to yourself, you might want to wear something else. Any clothing that is touch and go about staying put is probably a bad idea, so unless you don’t mind your body parts being exposed occasionally, stick with more practical attire.

Ladies, keep in mind that your body is going to pretty much be a projectile, so if you can’t touch your toes without showing something you’d rather keep to yourself, you might want to wear something else. Any clothing that is touch and go about staying put is probably a bad idea, so unless you don’t mind your body parts being exposed occasionally, stick with more practical attire.

I remember one show, I was, as per the usual, the only girl in the pit, when another chick decided to join me. She giggled and jumped around, and promptly went careening ass over end into a pile of bodies on the floor, her bum clearly exposed beneath her tiny pleated mini skirt. She disappeared into the crowd after that.

No post on moshing here at FreshTrends would be complete without a few recommendations for wearing your body jewelry in the pit.

Here’s the thing: It definitely makes the most sense not to wear any body jewelry in the pit, but I’m not gonna tell you to do that, because I know there’s nowhere I’d rather wear my best hardware than at a concert.

What you can do is utilize a little common sense, and plan for lots of snagging. Anything dangly is generally a bad idea, so no chandelier belly button rings, ladies. The same definitely goes for everything else, especially nipples. Wear studs and straight barbells wherever you can, and definitely opt for solid plugs instead of tunnels or hangers.

Ain’t scared? Go for it, but you have been warned. Piercings are a lot more sexy when they’re not torn and stitched back together like Frankenstein.

Whether you’re at an outdoor summer festival, or in a low-ceilinged dive bar in some god-forsaken place, mosh pits and concerts and general heat up fast. The adrenaline, the energy of the music, and the vigorous activities of the pit are going to make you sweat, bleed, and cry (just kidding, no crying in the pit), so drink plenty of water, and don’t be the person that crowd surfs unconscious so the medics can get to them.

This is one thing I noticed about the pit: Sure, there was always some gigantic meathead in the center, dropping the toothpicks that knocked into him like gnats, but for the most part, people genuinely care about not maiming you.

No matter how hardcore you are, always err on the side of nice, because seriously injuring people is never cool. If you see someone gets knocked down, make sure they get back up. If you see someone gets hurt, help to escort them out of the pit, and see if they need to get to a hospital. Keep an eye out for people, as you would want them to do for you.

I remember once getting buried in a pileup of bodies, and someone grabbing my hand to pull me out and make sure I was okay. Those things stick with you, so sure, be a badass, but be the badass that’s cool enough to look out for people.

Have you ever moshed and sustained an injury? Tell us about it, with all the gory details. in the comments below.

US Music Festivals of 2017: The Experience, the Look, and the Life

Piercings are for Lovers: The Badass New Take on Date Night

Previous post Piercings are for Lovers: The Badass New Take on Date Night

In Love With Conch Piercings