What Does My Gemstone Mean? A Quick Guide to Gemstone Symbolism 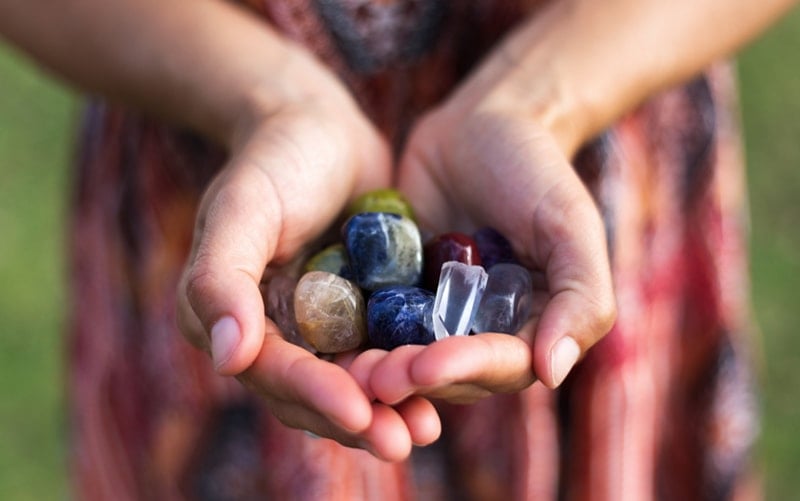 For thousands of years, humans have found inspiration from swirling colors in rocks, shiny facets of crystals and diamonds, and the fascinating luminescence of pearls. The vibrant tones of these natural resources led ancient people to the conclusion that gemstones held mystical properties.

Today, we know the science behind where gemstones come from, but the symbolism remains. Many still believe in the spiritual properties of gemstones and use them for healing, protection, and other purposes.

As you shop for your next body jewelry piece, go beyond the aesthetics and find an item that exemplifies something that you find important. Your jewelry will be transformed from a pretty accessory to an empowering symbol. Here’s a super fast guide to gemstone symbolism to help get you started.

In 1829, upon publication of a novel by Sir Walter Scott called Anne of Geierstein, opals earned themselves a bad name.  In the novel, the protagonist’s grandmother, Lady Hermione, dies after holy water touches her magic opal. Readers of the book mistakenly believed this to be Sir Walter Scott’s warning about the bad luck of opals, and the opal became a western superstition.

For thousands of years prior, however, opals were considered to be stones of good luck, healing, and protection. In multiple cultures, opals were believed to render the wearer either invisible or difficult to perceive, and they were thought to aid in astral projection.

Why opt for opal?

If its iridescent glow isn’t enough to make you fall in love with this gemstone, then maybe its good luck qualities will push you toward this misunderstood little gem. If you need some positive vibes to push your life in the right direction, the opal might be for you.

Note: Although our opals are faux, you can still enjoy the symbolism of the good luck charm.

Turquoise has been found to be of great importance to cultures all over the world. From Egypt to the Americas, turquoise is seen in artifacts in many different eras and locations. Interestingly, despite the vast difference of the cultures who used turquoise, a theme in its symbolism has emerged: the power of protection.

Some cultures believed that turquoise especially helped keep riders from falling off of their horses. Many would affix turquoise to their saddles in order to protect their horses as well. Some claim that turquoise will break to warn its owners of impending danger, and turquoise has been found in protective amulets and armor from cultures all over. Today, spiritual gurus still believe in the power of turquoise to protect.

Why opt for turquoise?

Besides its gorgeous color, turquoise has a strong argument for its protective qualities. Whether you’re an adventure seeker or a little bit of a klutz, turquoise might be the thing you need to keep yourself out of trouble.

Note: Even if it’s simulated turquoise and not the real deal, you can steel feel empowered by the symbolism of its protection.

Technically not a gemstone, amber is cut from the fossilized resin of prehistoric trees. Sometimes, you can even find an ancient bug that was unfortunate enough to get trapped in the resin millions of years ago. This connection to the natural world bred the belief that amber claims connections to the spirits of the natural world.

Many cultures claim that amber holds the essence of life. Others, like the Vikings, carved amber into different animals and believed the amber to take on the strength of the animal it resembled.

The Vikings weren’t the only ones to believe that amber had a connection with strength and power. The Greek historian, Nicias, thought that amber formed from the sweat of the Earth as the sun set, and others thought amber to be the tears of the gods. There is actually some science to back amber’s claim to power; when rubbed against wool or silk, amber becomes electrically charged.

Why opt for amber?

Amber’s connection with natural life and power gives its wearer an energized feeling. Amber is believed to promote positive energy, so it’s great to wear when you’re feeling a little down and need an internal pick-me-up. Besides its spiritual connections, its natural tones and ancient beginnings will make you feel closer to nature.

Many cultures found specific meaning in the diamond, but it all comes back to the unending strength of this gemstone. Depending on the culture, the wearer might find that the diamond protects them from harm, purifies their soul, or shows an eternal bond, such as love.

Why opt for diamonds?

Although diamonds shine in their own right, they also have deep-rooted symbolism that builds empowerment. When you need to feel invincible, or if you’re wanting a symbol that will last an eternity, go diamond.

You may or may not believe in the spiritual powers of the gemstone, but that doesn’t mean that its symbolic meaning can’t be an important presence in your life. Faux or no, when your jewelry means something to you, you’ll wear it more proudly. Go beyond aesthetics and choose your jewelry for its deeper meaning.