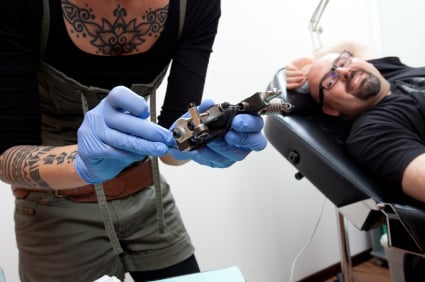 Gender Equalization in the Tattoo Industry

In a once male-dominated profession, female tattoo artists have become increasingly popular. With so many amazing female talents out there now, it’s hard to believe that women doing ink were actually once pretty rare. It’s a different story nowadays, though, especially since LA Ink brought Kat Von D into the households of millions on a weekly basis, showcasing not just her raw talent for the tat, but also her exceptional business ethic. This is surely one career field proving ladies have just as much cred as the guys. While there are still other industries that struggle with equality between the sexes, tattooing is different.

In the past, tattoos were the domain of men, both in doing them and owning them. But now with women getting them in equal numbers, it only makes sense that women would work in the profession as well. Many women who want tattoos are more comfortable with women doing them. And there are many people who are more attracted to the art that female artists create as well, showing there is a huge desire for a more female perspective in what was once a male art form. The stats are huge, considering that 20% of the population of the US has been inked, tattoos have become part of our cultural ideal of beauty, regardless of gender.

The best options for tattoo aftercare: H2Ocean and Tattoo Goo

The Perfect Gifts to Get Your Favorite Pierced Person

Hand Tattoos: What You Need to Know and Super Sweet Designs