Body piercing has been practiced for centuries, its popularity ebbing and growing with each passing era, but always remaining the top trend for body modification. Though these days piercing is associated with rebellion and youth, and the connotations are sometimes negative, piercings were usually used throughout history as symbols of status, wealth or power.

Mummified remains from as long as 5000 years ago have shown evidence of earrings, proving that piercing began several millennia ago. And even the more controversial forms of body modification, including nipple piercing and piercing of the genitals, have been a part of ancient culture, though we tend to regard them as more recent trends.

Ancient Egypt: Body piercing as a symbol of wealth

The Egyptians are well-known for their love of jewelry, and in ancient times most of them wore earrings to reflect their status and to accentuate their beauty. It was considered a mark of status to wear more and more elaborate pieces in gold, embellished with traditional designs and symbols.

Navel piercing was more unusual, however. Only the Pharaoh could have his naval pierced, as a mark of his exalted status. Anyone else who tried to get one was immediately executed! 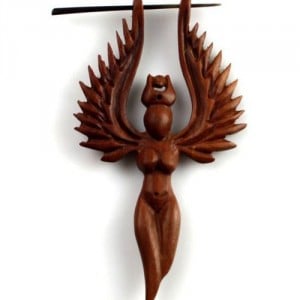 These days we tend to regard pierced nipples or genitals as a modern trend, but in fact, these practices have been around for hundreds of years. In ancient Rome, gladiators used to have their nipples pierced as a mark of virility and strength. It was a kind of symbol of unity as well, which marked all the members of the army as one. Even Julius Caesar had his nipples pierced to show he was at one with his men.

A ring pierced through the head of the penis was also common, as it allowed the gladiators to tie their genitals back with a leather strip and so avert injuries. If replaced by a larger ring or bar, it ensured the gladiator would be unable to have sex with anyone without his owner’s permission. As gladiators were often regarded in terms of their breeding potential, their masters could then charge others a stud fee for the privilege, and the opportunity to breed the next generation of fighters.

Africa and South America: Piercing as a sign of beauty

Lip piercing and lip stretching were traditionally practiced in African and American tribal cultures. Labrets (lip piercing body jewelry) were common among Mayan and Aztec tribes, and in Africa, women wore large rings in their lips. Some tribes even practiced lip stretching, where the lips were progressively made wider by inserting plates or plugs. The fuller lip or a lip pierced and adorned, was considered a mark of beauty, and the labrets were often made of gold or jade and highly decorated.

Tongue piercing, meanwhile, was also practiced by Aztecs and Mayans, and some Native Americans as well. This ritual was associated with religious ceremonies, a way of appeasing the gods and getting closer to them. Septum piercing was also done to make warriors look fiercer, and many a great Aztec fighter struck fear into his enemy’s heart with a massive boar tusk wedged through his nose!

Europe saw a rise in body piercing during the Renaissance and Elizabethan eras, when members of the aristocracy would display their wealth by donning large diamond or pearl earrings. Women began to wear plunging necklines – inspired by Queen Isabella of Bavaria, who introduced the ‘garments of the grand neckline’ – which exposed more flesh than they covered. With so much on display, women began to have their nipples pierced and rouged, and some even wore delicate chains or pearls strung between the rings. It became widely accepted that nipple piercing, and even genital piercing could increase stimulation and sexual pleasure.

During the Victorian age, Prince Albert (future husband of Queen Victoria) had his penis pierced, a piercing that was later named after him. Because the trousers in fashion at the time were so tight-fitting, a small ring through the penis was used to ’hook’ it to one side or another, preventing an unsightly bulge. This kind of piercing soon became known as Prince Albert.

Sustainable Shopping: How We’re Taking Responsibility for Our Environmental Footprint

Can You Kiss with a Lip Piercing? A Guide