13 Couple Tattoos To Consider Getting For The Right Person 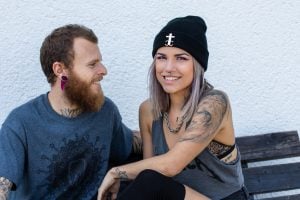 We’ve all seen those cutesie little couple tattoos of matching hearts or infinity symbols and so on. The ones that are equal parts “how sweet” and “how cringe”. I’ve seen those tiny hearts, keys and locks, rhythm strips, anchors and ship wheel, and infinity signs. But what about those tattoos that are actually pretty decent? They look nice alone and even better when they’re matching someone else’s. They take time to create and time to heal, and they mean something deep. I must confess, I’ve fallen victim to getting a couple tattoo. However, my partner still has yet to follow through (he doesn’t like needles). Until then, I have a single slice of pizza on my arm waiting for the other seven-piece pie to show up. Here are some ideas other, more creative people had.

Someone once said that “we’re all searching for someone whose demons play well with ours”. These tattoos proclaim that they’ve met someone who appreciates their demons.

This is really cool because it’s a lovely nod to Lily and James Potter from the Harry Potter series. These represent the shape their patronuses would take. Then again, the “always” is a reference to Severus Snape and his feelings towards Lily… So I’m not exactly sure what to think of that.

Before I ever began watching BoJack Horseman, my partner told me I reminded him of Diane. Curious, I began watching the show and I could definitely relate to her. A driven, sarcastic, introverted, nerdy writer? Yep, that’s me. I do appreciate that someone made flash art of these two to be made into potential tattoos, but the relationship between Diane and her husband, a selfless, lovable Mr. Peanutbutter (whose demeanor is very similar to my own partner) is very complicated. It’s borderline toxic, even though they try going through therapy. They can definitely be #relationshipgoals but it remains to be seen whether this fictional pair will actually remain by each other’s side.

This portrays a pair of Roman numerals reading 26-9-2017, which I could only assume is their anniversary.

I really dig the artwork of this. They would have been excellent pieces on their own, but they match so well together.

If I had to pick, this one would be my absolute favorite. It’s simplistic, minimalistic, but deeply personal. The lines only link up when they hold each other. And it’s not just when the woman holds the man, but also when the man holds the woman. The lines down both their spines link up with the opposite person’s wrists and that is incredibly beautiful.

I like these tattoos because they’re more pieces which could look perfectly awesome alone. But I understand why they would match. Relationships have phases, just like moons. Sometimes they’re bright but other times they’re almost entirely dark. Being in a relationship means you’re willing to stick it out through these cycles.

I’ve seen the king and queen tattoos so many times, it’s gotten old. Personally, I am so over the “his queen/her king” pieces. Even the little K and Q with hearts underneath is bland. But this? I love it. Maybe it’s just because I really like chess, but I think these tattoos are pretty cool. They get the same point across but in a classier, nerdier way.

Foxes and wolves are both super cute on their own, and even cuter alongside each other. They complement each other well with their shared strength and cleverness.

Each are a little useless alone.

For when you finally meet the one who lights up your life (okay, yeah, that was cheesy of me).

This reminds me of that one song that goes “You can be the peanut butter to my jelly / You can be the butterflies I feel in my belly” and I love that.

Kiley + Scott // they even have corresponding tattoos. 😍

Short, sweet, and to the point. Gotta love it!

So which pair is your favorite? Do you and your partner have any matching tattoos? Regardless of which tattoo you like best, always remember to take care of your ink.

The Perfect Gifts to Get Your Favorite Pierced Person

Ear Stretching: What You Need To Know

Previous post Ear Stretching: What You Need To Know