Something weird happens when you have kids. Where before you were a wild, colorful individual that gave little thought to how others perceived you, suddenly there’s this beautiful, shining tiny human in your life, and you feel compelled to be the best mascot you can be for them.

You’re the parent, and you feel obligated to uphold a certain image for your children. You want to look professional, mature – like you totally have your shit together, and are entirely too focused on fine motor skill development and growth charts to think about dying your hair pink or getting a lip ring.

You might be shaking your head and rolling your eyes right now, but for a lot of parents, this isn’t very far from reality. When we have children, we feel like we’re held to a higher standard, and on some subconscious level, it matters to us that society thinks we look the part of a ‘good mom’: conservative clothing, natural makeup, and certainly nothing as edgy or sexy as a bunch of tattoos and piercings creeping out from under our clothes.

Shattering the Image Stereotype of the Modern Parent 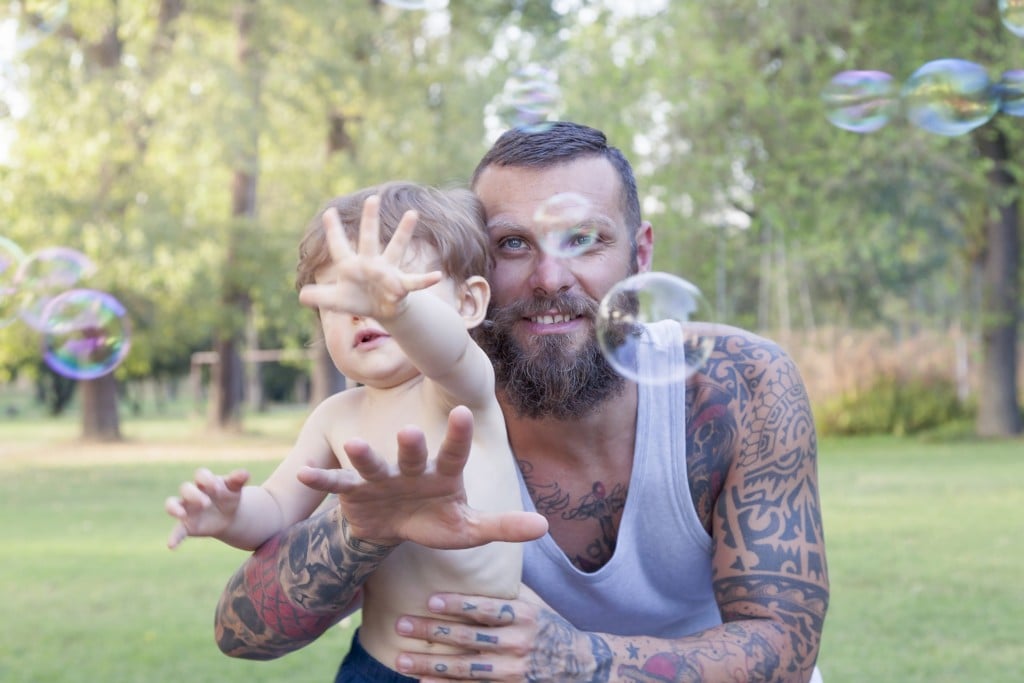 You guys, as a mommy myself, I’m here to tell you: the times have changed.

Parents come in all shapes and sizes, from all walks of life, and as the sense of community grows with the ability to network online, we’re all being a lot more honest about what being a good parent actually looks like.

People are putting their appearance stereotypes aside, and are instead looking at each other’s methods and actions, instead of how they’re dressed or what kind of alternative appearance they may have. Even in an age of seemingly endless judgment, people have never been more accepting of different types of parents.

You’re not defined as a parent by your appearance, and people are finally starting to get that. The modern mommy and daddy is pierced and tattooed, messy-bunned and donning leggings, and guest what – nobody cares.

The Reality Check: Getting a New Tattoo with Young Children in the Picture

Society has definitely come a long way in opening their minds to what the modern parent is supposed to look like, but that doesn’t change a few core mechanics of having a family. Spending time and money on unnecessary things like tattoos and piercings is something that only gets more challenging after you start a family, and a lot of people find that their trips to the parlor slow way down – whether they like it or not – after having kids.

Sometimes I find myself daydreaming about my next tattoo. In my head, it’s this intricate black and white spread of kinnickinnick with vivid red berries, wrapping around my thigh and hip, and I love it. I look at images on Pinterest, I play around with color templates, I daydream – and then I promptly get hit in the head with a toy truck.

The bottom line is that I can barely get away to take a shower. Whereas before kids, spending 6 hours every other month in a tattoo shop was no big deal now the thought is laughable. Finding the time between play dates, work schedules, and being too exhausted to move means that tattoos just sit on the back burner for most parents.

Addtionally, if you’re a woman, there’s a solid chance that you’re breastfeeding, and it can be literally impossible to get away for more than two hours for at least that first year of your child’s life. Many babies (like mine) outright refuse a bottle, so getting away for enough time to make any kind of progress on a tattoo can be particularly challenging.

I’m not certain, but I’m fairly sure that tattoo artists frown on women nursing during their sessions.

Aside from the issue of time, money is also a valid concern – it’s hard for a lot of us to justify spending a few hundred dollars on a tattoo when there are doctor’s bills, summer clothes to buy, and a kitchen that seems to need endless restocking. I know personally, if I have even one thing on my plate financially that needs to be taken care of for my son, I just can’t even come close to justifying a trip to the tattoo parlor.

Then there’s the healing process. Oh. My. Gosh.

If there’s one thing that makes me cringe, it’s the thought of my son’s scraggly little fingernail raking over a fresh tattoo. When you first get inked, it’s always incredibly tender for those first few days and weeks. The problem?

Toddlers don’t give a f%*k.

If you do plan on getting a new tattoo, make sure you’re prepared for defending that patch of skin from curious hands diligently over the coming weeks as you heal. It’s an unpleasant thought, but it can also complicate your healing process if your tattoos are under constant attack from tiny human hands.

Getting Piercings as a Parent

Piercings aren’t nearly as time or money intensive as tattoos are, and therefore I feel like they’re a much more realistic option for parents hoping to update their look. In no time flat, it’s done and over with, and the only expense is the fee your piercer charges and the cost of the jewelry.

The biggest hangup with getting piercings always comes down to the snagging factor. Tiny hands don’t care how much it hurts, and curiosity all too often prevails. If you have very young children that still struggle with communication and language, it can be difficult to establish the boundaries needed to protect yourself. My advice would be to wait until your kids are old enough to understand that those piercings hurt when tugged on, so you can establish those rules to protect yourself. 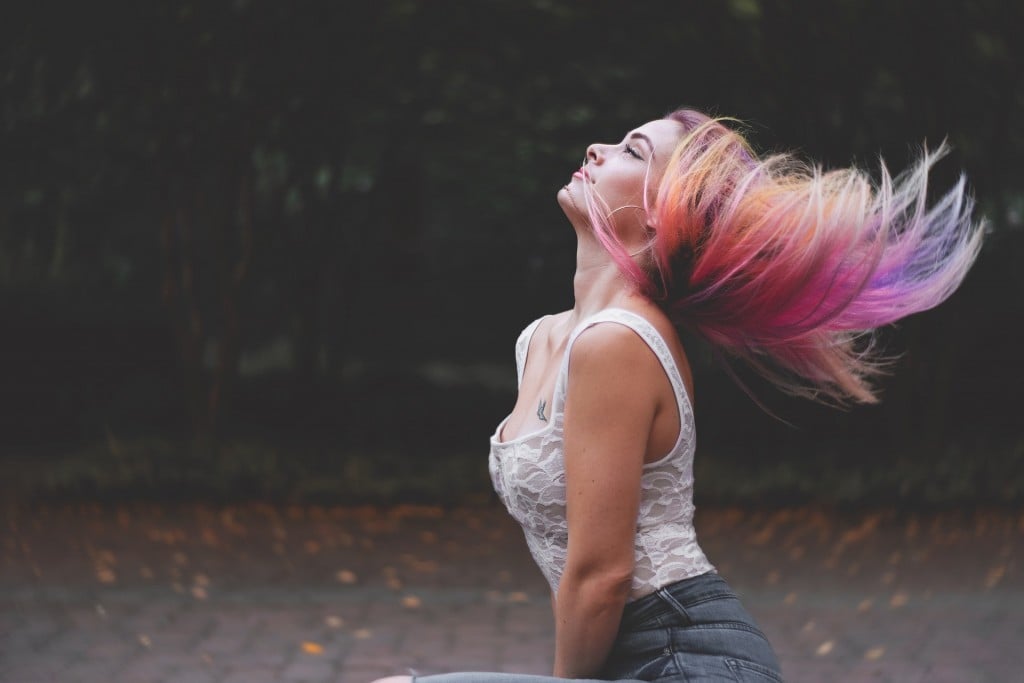 This is something that is becoming so common, and I effing love it. More and more moms are realizing that their hair color is just that – their hair color – and are casting social expectations aside to get what they want.

What’s really adorable is, kids actually really love this one. Nothing says you’re a fun mom like hot pink peekaboo highlights or a full head of pastel hair. Moms are enjoying the freedom in their self-expression, and kids are learning that having a sense of personal identity is both fun and okay.

The Bottom Line: F*#k the Expectations

When it comes right down to it, you can’t let being a parent hold you back from doing something that isn’t going to actually affect your child. We’re not talking about moving into a bad school district or feeding them processed sugar at every meal – we’re talking about your appearance, and ultimately, it just doesn’t factor into how you parent.

Decide what you need to feel comfortable in your own skin, and then decide if it’s a sensible fit for your family. If you can swing a tattoo without having to stop for a nursing break, or get a piercing without having your baby yank it out, then just do it. 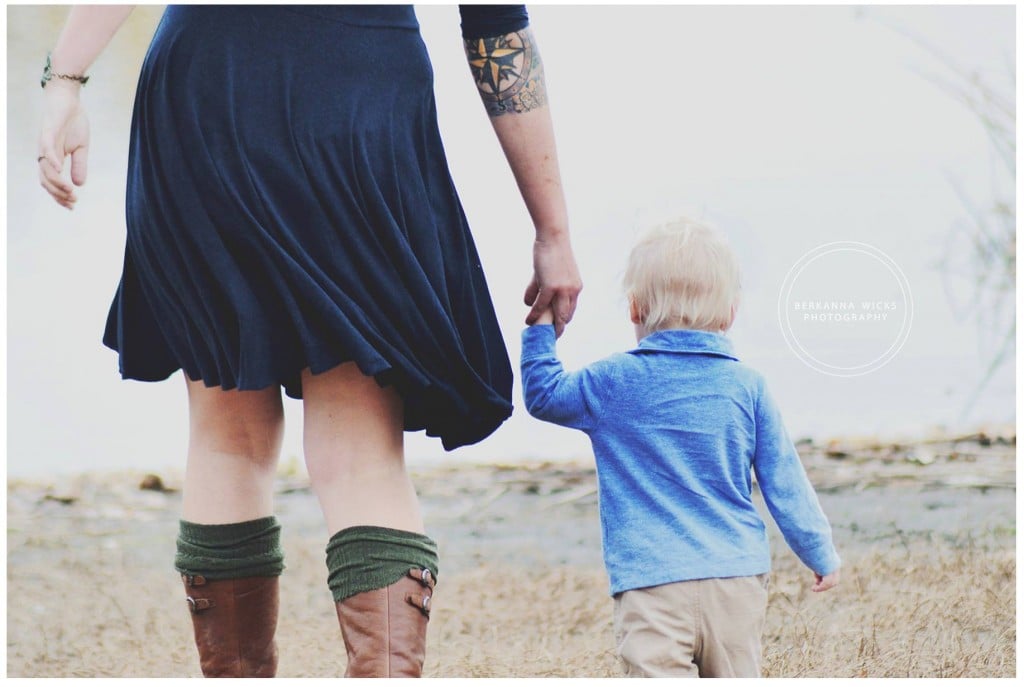 Join the ranks of the tattooed and pierced parents that are changing the face of the new generation of child-bearers, and be comfortable in your own skin.

The good news – someday, you’ll be a grandma. Then you can pierce, stretch, and ink all you want (watch out for the bits that are most prone to sagging, though) all you want. I’m pushing 60, and life is good. BTW, I’m also an RN.

Woa – I can only hope to be as badass of a grandma as you clearly are Jennifer! I love seeing people just living it up in their own skin they way they want, social standards be damned. You’re an inspiration <3